at the golf course on Friday.  Beautiful morning, so we ate out on the patio, and, Archie was able to go.  Of course, he was styling.  A lot of laughs provided by this little guy, from both friends and complete strangers.  People were coming out of the restaurant just to see him, and, he knows it.  Not much else happening.  Rained some last night, a dreab day today.    Later............. 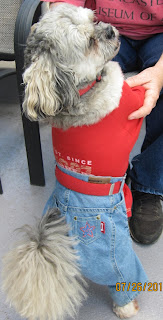 last night.  It was only the second time, in 35 years of living in this house, that I checked the upstairs after a VERY close lightening strike.  It was also the second time I smelled sulfur after the same strike.  Since I was already up, I closed the last window where the dogs were, and, brought them back to bed with me.  They, normally, don't have a problem with storms, but, I felt they would feel safer with me.  They didn't argue.  Also, looks like I will have to replace 2 phones.  Everything else is ok.

Since the ground is saturated, I should finish the front flower bed.

in a trial that should never have happened.  OK, first, let me say to Trayvon's family, especially his parents...."I AM sorry for your loss."  People have told me how hard it is to lose a child. I never had children, didn't want children, don't really like children, but, that's another story.  I have loss young family members and watched my parents and grandfathers suffer greatly with 'survivor's guilt'.  But to repeat myself, this trial should not have happened.  If Trayvon was white and Zimmerman black, it would've been a different story.  BO should of never got involved with the 'my son' comment.  I can't picture GB ever saying that.  But, that is comparing apples to oranges, eh?  Now, if the people stay calm and carry on, don't pull another 'Rodney King' episode, and Al Sharpton and Jesse Jackson need to stop stirring the pot, then the nation can put this circus behind us and move on.

On a lighter note, woke up in the night to more rain.  Was going to be a heathen today and mow, but the sun is not shining for any length of time, so the sponge, that use to be my yard, won't dry out.  Fred is coming down this morning to do a little work.  He's not been here for a while 'cause his son got married last fall and they bought a house in the same development which needed some work.

Dad's been checking out his new tractor, the seat, tires, tubes, distributor cap, plug wires, plugs, starter thingy, manifold, exhaust are all new.  In his mind, this brings the price down to a more palatable figure.  If that stuff hadn't been replaced, the tractor might of cost him less, but, then he would be buying the stuff.  Broad as it is long in my book.  But, what do I know.  I'm just glad he got it.

Amish going by the house this morning, HA, dogs are sleeping and don't see them.  Have the A/C on and they don't hear or smell them either.  Peaceful for a change. 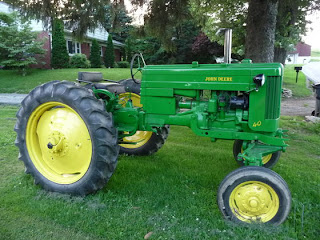 Archie and I went to a sale with Dad just north of here, about a 30 minute drive, 20 if I was driving.  Just the house and barn on 1.2 acres and this John Deere were all that was being sold.  The lady having the sale was already gone.  Moved to Oregon to be closer to her daughter, something about a divorce.  The tractor was listed as 'restored'.  Shoulda said 'painted'.  It's restoration is not up to dad's standards, but it's not bad.  At least they didn't paint it with a brush.  The one auctioneer lady was gushing about "its all restored, you won't have to do anything to it!!!!"  Dad flat-out told her, 'yeah, but they shoulda put on two more coats of primer and sanded more.'  She just said, 'oh.'  As you can see by the picture, they didn't even clean up the tires.  Anyhow, he bought it, I called our friend Chuck, who roared up there with his truck and trailer, loaded the John Deere 40 and delivered it to dad's where it sits snugly in the barn with it's big brothers, a 720 and a 1020.  That barn was just too empty!  Now, we need to find fenders, for it must have fenders! 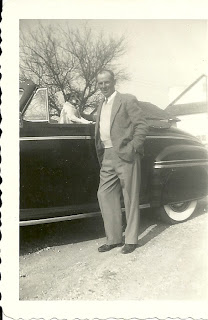 He is now 95 years old and no one in his family has reached that age except one of his mother's sisters who was 97 when she died.  She would spend time at their farm as a young girl and she was a hoot, I loved Aunt Elsie.  Dad actually took her to a dance and everyone wondered who his new girlfriend was.  He definitely gets the longevity from his mom's side of the family.  His dad's side all dropped over from heart attacks anywhere from their 60's to 80's.

Do you see a pattern here with the two pictures?  He loves dogs, that's why he and Archie are such buddies.  And, he always had cool cars.

His birthday was yesterday and he spent the day cleaning the lawn mower among other stuff.  I called my cousin Jack and asked if they would like to meet us at the restaurant that dad and Sarah always go to after church.  He said, "Sure, great idea!"  I had gotten an email from another cousin and I mentioned the lunch to her and she just let me know last night that she and her mom will be there.  I hope they contacted the other two nephews, 'cause I don't have their numbers.  I had to tell dad that I would meet them there but he doesn't know about his nephew and niece showing up.  He had asked me not to do anything, but, if he gets mad, he'll get glad again.  Won't be the big party we had for his 90th at the Park.  Friends brought their tractors and the rangers all thought that was so cool.  This will be a nice little get-together with family.

Finally had a couple of days with NO rain, but it's nasty and hot, in the 90's.  Have the A/C on for the dogs (and me).  Hope everyone had a good Independence Day.  I went to lunch with friends and came home and mowed.  Got stuck, twice, down by the creek.  I have always been able to mow that part of the yard until now.  I hope it's not the drain field acting up.  Darn 'fall grass' is coming, and the yard will soon look like a shag rug.  I hate that stuff.

Did breakfast on Friday at the Golf Course, took Archie 'cause we eat out on the patio.  Everyone loves that dog.  A couple sat down at the next table and we were talking about dogs.  The husband had already wussed on him, then the wife got up and came over and made over him.  He eats this up 'cause he was so neglected the first 3 years.  Then his aunts and uncles started showing up, made his day.  He got his own scrambled egg and a cup of water.  Doing it again this coming Friday, hope it's not raining so he can go along.