just what the 'budget' needed!  Then..........a Parking Violation notice from.............Philadelphia!  I HAVE NOT BEEN IN PHILTHY DELPHIA IN 50 YEARS!  Morons!  Called the number, press 1 for English, yada-yada-yada and finally get a real live person!  Boils down to.... me, sending in paper work to prove that...yes, the car is mine, but, no, it is NOT a white Dodge, it is a black PT Cruiser, and, no, it is does not have an expired inspection sticker, and, I HAVE NOT BEEN IN PHILTHY DELPHIA IN 50 YEARS YOU MORONS!  She told me to send in my recent emission inspection sheet and that would void the ticket.  To which I replied, "But, it is NOT my car!  It is my tag number, but not my car.  What does that tell ya!"  Anyhow, sent in the paper work and I'm to call them on the 15th to see if it is all resolved.  Dad said if it is not, we're going to the lawyer.  He's more pissed than I am.  Mistakes have never 'sat' well with my father.  Now, I think the microwave is taking a dump.  Just ^&*#$%^ lovely.

not much, probably 2 inches or so.  'Nuf to be a nuisance.  We decided on Wednesday not to do supper tonight with this storm coming in.  So, tonight I made fried chicken, gravy and potatoes, not bad.  Was s'pose to go to breakfast tomorrow morning with friends, but that's cancelled.  With my truck in the shop, I'd have to drive the PT Cruiser and that's out of the question.  I'm not afraid of driving on bad roads but there are too many nutz out there that do not know how to drive in good weather, let alone bad.  Besides, I had to drive it for 46 years, to and from a job, that's enuf of that.

no, wait, that won't work either.  Have to build a barn, buy hay, vet bills.  Crap.  Anyhow, Monday, took the car to Sam to fix the tire but, as in a previous post, the screw was short and only in the tread.  Ahhhhh.  Life's good. 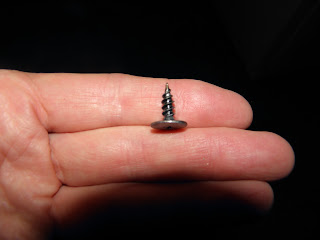 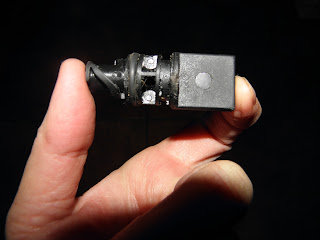 Today, took the truck to the PO and got about 3/4's there when the heater started blowing cold air.....again.....Managed to do a u-turn before it shut off.  Temp was WAY OVER....Crap.  Called Sam,  "See if it starts and try to get it here,  it's probably the stat."  Right.  Started it after the temp dropped, managed to get another mile or so.  Did that two more times and got it to the garage.  When I looked back at the truck while walking into the garage, I saw the drip.  Crap.  Sam went out and saw a drip, crawled under the truck.  Came back in, looked at me and said, "I don't believe it, that $%^&* plug is gone."  We decided to go with a new radiator, Sam brought me home and then we saw all of the anti-freeze in the driveway and down the road.  Later, Sam called me to say he called a couple of guys with shops and both said, new rad, once this happens you'll never keep a plug in.  Oh, and when he left my house, he spotted the plug down by the bridge.  It's not hurt, nothing broken, just can't figure out why it flew out.  I googled the problem and one fellow said there might be excessive pressure in the cooling system and to check for head gasket issues.  Crap.

Yesterday went to a memorial service for an old family friend.  Harry was 83, his heart finally gave up.  Left a wife and four daughters, 3 of which are Drs.  One is a GP and the other two are college profs.  Had a son to his first wife, but the last anyone knew of him was he was in jail.  Family dynamics are strange sometimes.

Found a screw in the rear tire of the car.  Took it over to Sam this morning, luckily, it was a short screw and was only in the tread.  No leak.  Got them to inspect it and will take it back for an oil change this after.

Calling for snow today and tomorrow.  Just flurries.  But got a mess of wood in the house over the weekend just in case. It was so pleasant outside Sat and Sun it felt like spring.

Dad is feeling better so him going to the doctors is a pipe dream, now.  Not much else happening,

sums up our weather for the past 3-4 days.  Yesterday, the weather coin-flippers were calling for snow on Tuesday.  Now it's rain.  Where else can you have a job, be wrong 50% of the time and still get paid?

I'm meeting my ex-boss for lunch on Wednesday, with two other ex-co.workers.  Lunch at the small airport in town is always a treat.  It's fantastic food and I'll go early so I can people watch.

Coco had another 'hot-spot'.  I caught this one in time and we didn't have to go to the vet.  Daisy's limp is gone.  Archie is doing great, he gets groomed next Tuesday.  Dad said it's too cold for a haircut.  Maybe I'll just have her trim it a little.  The crate I bought for him seems to be working.  There have been no messes in the house.  Of course, he's not happy.  But when I came home to pee and poop in the house, I wasn't happy.  So....if one of us has to be unhappy.......it's gonna be him.  The cats are all OK.

So, all is good and quiet at the Meadow House.

Oh, go visit Brigid at Home on the Range!  She has a great post about garages.  What a treat to read her writings.  The girl has a gift, for sure.

Took Archie over to Trudy and Phillips' for a play-date with Titus.  What a drop-dead, beautiful dog.  He is just about a perfect Doberman.  Feet the size of saucers.  They tolerated each other, a little growling, Archie curled his lip once when Titus got too close to me.  But it was a good day and we plan on doing it again if the weather stays nice.

Then on the way home I stopped at Bob and Judy's to see their pup, Savannah, a Newfoundlander.  Another sweetie, holds her own with Jasper, who is a full-grown Newf.  She'll be good for him as they lost Caoz this summer and Jasper needed a companion.

Then, stopped at Dad's and picked up his mail.  He looked really tired and said so.  He is also dropping hints that he needs to go to the doctors, so I think I'll quietly encourage that and see where it goes.

Need to punch up the stove and read the paper.

as my grandfather use to say.  I've got a dead mouse, somewhere, is it ever getting rank.  Probably under the house.  Lord, God almighty does it stink, and, will most likely keep stinking until the weekend.  Geesh!

Archie has a 'play-date' tomorrow with Titus.  My friends, Trudy and Phillip, got a Doberman puppy last Friday.  She asked if I would bring 'the boy' over as they are trying to get the pup socialized.  This will be interesting.

Got home last Thursday from dad's and as I pulled up to the house to back in the driveway, the heater started to blow cold air.  Hmmmm.  Called the mechanic the next morning after I saw the wet spot on the road and the trail down the driveway.  He asked if I could get it there.   Sure, no problem.  It's about a mile.  Got to the stop sign and it died.  What?  Wouldn't start! What?  Sat there for a minute, called them, Jim said, "OK one of us will be there shortly."  Tried it again, it started, I floored it, got to the garage.  Whew!!!  They started pouring anti-freeze/water in it and it started pouring out the bottom.  Ooops!  Looks like the rad was cracked from the accident last year and  Rich missed it.  Oh boy, now I get to fight it out with the insurance company.  Jim brought me home and I found the bill where I had the radiator replaced in June of 2010.  Went back over to the garage and Sam said, 'Hey, it wasn't a crack after all.  The plug is missing.'  What?  In all of his time spent working on vehicles, he has never heard of that plug just popping out.  He said, 'I've got a new plug coming, we'll fix everything and I want to drive it so I'll drop it off.'  Okey-Dokey!!   $69 is sure better than $400.  There is a God!!