for the past few mornings.  S'pose to rain Friday and Saturday.  Hope it is clear for Turkey Day as we are traveling.  Getting hungry for turkey dinner and all of the fixins.
New fridge is running so quiet.  Can't believe the old one was almost 20.  Should see a drop in the electric bill.  Still haven't found a stove.  Don't need a fancy one, I wouldn't have a kitchen except it came with the house.
Got propane yesterday, $1.82!!!!  When I stopped in September and asked about the price it was $1.59, but I had too much in the tank then.  Probably shoulda called sooner.  Oh well.  It's still cheaper than oil.  Need to turn the other furnace on in the living room also.  This see-sawing hot-cold days are gonna end and it'll be staying cold.
Had a real nice dinner with my old boss, and two other ladies I use to work with, on Tuesday night.  We ate at Carrabba's.  Never been there, food was good, but on the expensive side.  Haven't decided where to go in December.
Just saw three deer running in the back meadow.  Probably just released.  Haven't had any around here for a couple of years.  Couldn't tell if buck or doe.  Didn't have time to get the binos.  Dogs are going nuts.  They'd be the type to chase deer if they could.  A couple in the next town lost their dog to a bow hunter last week.  Fool thought it was a coyote.  She was only 10 months old and had wandered just off of their in-laws property.  The farmer had allowed these two cretons to hunt and the one shot her.  If he is that dumb or blind that he couldn't tell her from a coyote he shouldn't be hunting.  Don't you have to be 100% sure????  Not 'think' it is.....!!!  Investigation is still going on.  Don't know if Game Commission will do anything.  Hope the idiot has sleepless nights. 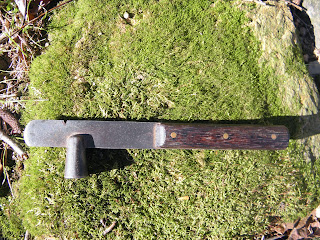 About the size of an ordinary knife one would use for eating.  Wooden handle.  No, it's not a candle snuffer.  That piece is solid.  End of blade is thin and fairly sharp with notch at top.  About 7" long.

why, in GOD's name, I woke up this morning at 4:30!  Looked at the clock....WHAT!  NO, UH?  Crap.  And, NO, it wasn't the dogs.  I actually got THEM up.  Just wasn't anymore sleep left in me, I guess.  So, I got up, stripped the bed, did 3 loads of wash, hung the blankets on the line, had two cups of coffee, had breakfast, re-planted some tulip bulbs, transferred a small maple tree...all before 10 a.m.  Then, went for the paper and the mail.  Swung around to dad's to check on him.  He and Sarah were going to a 50th anniversary party this afternoon.  Stopped at a little antique shop over in the next village, bought a cute little pen knife for $2.  Then a visit from Cindy's two grandkids, who delivered the pizza I'd ordered from their school fund drive.  Not doing much else this evening.

Got a new fridge coming Thursday.  The old one runs a lot, it's rusting on the outside and the gaskets are shot.  This one was $300 off.  Decided it was time.

but, had to let you go.  NO, NO, I'm not going anywhere.  I just cleaned out and cleaned up my blog list that I've been following.  About 60 had to go.  Some haven't posted in over a year, so, I've given up.  Hope they are OK and just too busy to write.  A few were just tired, and a couple that I've kept are on the edge of going.  Got it down to a manageable couple of dozen.  I realize that it is a stressful world we live in and a lot of people are busier than I am and here lately, I haven't been posting like I use to.  But, I miss 'Treesong' and 'JohnnieB' and don't know what happen to them.  Their blogs were always a good read.  You do get close to people you read everyday.  I still miss Ben from Texas that died last summer.

Getting late, this new time (which makes absolutely NO sense) will screw up my household for a month.  Dogs got me up at 5:50 AM this morning, instead of 7. Gotta get to bed.