I am not afraid of snakes, and wondered why I jump when I see one.  It's because they startle me, not scare me.  I met up with this one this morning while walking the dogs in the back yard.  To my knowledge, these three dogs have never seen a snake, and, they didn't see this one because I managed to get them back in the house.  Grabbed the camera took a couple of shots, went about my business and when I looked again..... Mr. Black Snake, or Miss Black Snake was gone. 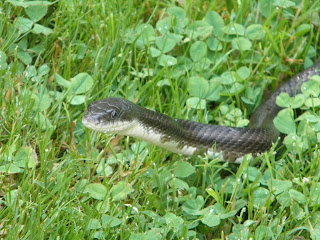 PRAYERS GOING OUT TO OKLAHOMA!!!!

I cannot fathom what these Americans are going thru.  Why isn't there a shelter in the school?  What part of 'Tornado Alley' didn't they understand?

are hot and heavy right now.  People must be doing a lot of spring cleaning.  I've had a total of four yard sales since I moved here and have always done well.  But, one house down the road has maybe four a year.  I think she buys from others then when she has a plethora of stuff, she sells.  A lot of work for sure.  A lady down in the village had one last month and I stopped on the way home.  She had the usual and I saw nothing I couldn't live without.  Then, when she figured out where I live, she started talking to me about her neighbors, which I've known for 40 years, but she didn't know that.  She said how she 'had her in the hospital last year' and how 'she mows their yard' and 'their son, L...... always comes home and backs his tractor-trailer in their yard and f...s it up' and 'their granddaughter committed suicide and him a preacher' and 'last winter the fuel-oil dealer wouldn't deliver because their basement was too packed with junk, so she cleaned it out and sold it and they split the money, now it's filled back up' and 'the other two boys never come around' and on and on.  Quite the little chatter-box she was and what a potty-mouth.  I stopped at another yard sale on Friday coming home from breakfast.  SCORE!!!  Got a nice insulated work shirt and a very nice leather jacket for $1 each.  Perfect fit too!  Guess I'll have to stop at them more often, I usually don't have that kind of luck.

Got the whole yard mowed yesterday and even cleaned the mower.  It's a job I hate and, sad to say, I only do it when the Toro starts sounding like a jet engine.  I love to mow, and having the whole yard done is a sense of accomplishment.  S'pose to rain the next 3 to 4 days, so there's a lot of people hustling to get their yards done.  The little pansy's are lovin' it in the troughs.  Was a bit concerned that these containers would not be deep enough but the plants are looking good.  Tulips I planted last fall have all done well but are just about done.  Think I'll get more.  I love tulips, a hassle-free flower, they just don't last long enuf.  I wish my azaleas would bloom all summer but that's not gonna happen either.
Had just one baby robin born in the nest on the grapevine wreath hanging on the barn.  I assume its the same mama every year.  Baby is gone now.  Wonder if she'll have more.  Robins are nasty birds.  When I had the bird bath, of all the birds that showed up, they were the only ones that would drink, turn around, poop in the water and fly off.  Cretans.
Had breakfast this morning with Dad and Sarah over at the fire hall.  They raised the price to $8, but you don't go hungry.  It's buffet and you can go back as many times as you want.  It wasn't too crowded this morning.  Maybe a lot of people have started their holiday early.  Can't believe Memorial day is next weekend.
Not much else going on.  Need to get Archie to the vet.  He's not really sick but just ADR (ain't doing right).  Might be his teeth as they are due for a cleaning.  He also keeps licking his left front paw and that's the one he screwed up the dew claw on.  When he was groomed on Monday, he REALLY pitched a fit as she was clipping his nails on that paw. 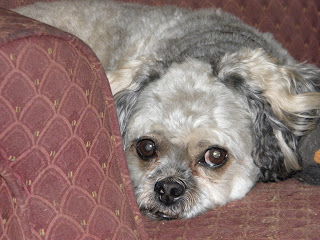 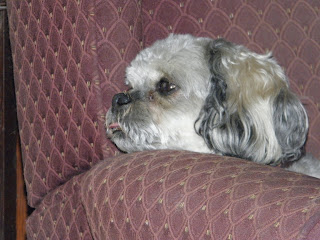 The youngest mother whose history is authenticated is Lina Medina, who delivered a 6½-pound boy by cesarean section in Lima, Peru in 1939, at an age of 5 years and 7 months. The child was raised as her brother and only discovered that Lina was his mother when he was 10.

On April 9, 2003, Satyabhama Mahapatra, a 65-year-old retired schoolteacher in India, became the world's oldest mother when she gave birth to a baby boy. Satyabhama and her husband had been married 50 years, but this is their first child. The baby was conceived through artificial insemination using eggs from the woman's 26-year-old niece, Veenarani Mahapatra, and the sperm of Veenarani's husband.

Bobbie McCaughey is the mother who holds the record for the most surviving children from a single birth. She gave birth to the first set of surviving septuplets - four boys and three girls -on November 19, 1997, at the University Hospital, Iowa, US. Conceived by in vitro fertilization, the babies were delivered after 31 weeks by caesarean in the space of 16 minutes. The babies are named Kenneth, Nathaniel, Brandon, Joel, Kelsey, Natalie and Alexis.

Jayne Bleackley is the mother who holds the record for the shortest interval between two children born in separate confinements. She gave birth to Joseph Robert on September 3, 1999, and Annie Jessica Joyce on March 30, 2000. The babies were born 208 days apart.

Elizabeth Ann Buttle is the mother who holds the record for the longest interval between the birth of two children. She gave birth to Belinda on May 19,1956 and Joseph on November 20, 1997. The babies were born 41 years 185 days apart. The mother was 60 years old when her son Joseph was born.

The highest officially recorded number of children born to one mother is 69, to the first wife of Feodor Vassilyev (1707-1782) of Shuya, Russia. Between 1725 and 1765, in a total of 27 confinements, she gave birth to 16 pairs of twins, seven sets of triplets, and four sets of quadruplets. 67 of them survived infancy.

The modern world record for giving birth is held by Leontina Albina from San Antonio, Chile. Leontina claims to be the mother of 64 children, of which only 55 of them are documented. She is listed in the 1999 Guinness World Records but dropped from later editions.

Katherine Hepburn's father was a surgeon and her mother was a dedicated suffragette and early crusader for birth control.

Kim Basinger's mother had been a champion swimmer who performed water ballets in several Esther Williams movies in the 1940s.

Laura Dern earned a Best Actress Oscar nomination for her illuminating performance as the title character in Rambling Rose, an underrated picture in 1991 that also won a Best Supporting Actress nomination for her mother, Diane Ladd. This was the first time a mother-daughter team had been so honored; they became the first mother and daughter ever nominated for Academy Awards for the same movie.

Madonna's mother died when she was five years old.

Phyllis Diller, a 40-year-old mother of five and an advertising copywriter for a California radio station, made a rousing comedy debut at San Francisco's Purple Onion in 1957.

American talk show host Conan O'Brien's father is Dr. Thomas O'Brien, a noted epidemiologist, the head of microbiology at Peter Brigham Hospital, and a professor at Harvard Medical School. His mother, Ruth Reardon O'Brien, was a partner at Ropes & Gray law firm outside Boston until her 1997 retirement.

Elvis Presley, was a mama's boy. He slept in the same bed with his mother, Gladys, until he reached puberty. Up until Elvis entered high school, she walked him back and forth to school every day and made him take along his own silverware so that he wouldn't catch germs from the other kids. Gladys forbade young Elvis from going swimming or doing anything that might put him in danger. The two of them also conversed in a strange baby talk that only they could understand.

Many of the sweaters worn by Mr. Rogers on the popular television show, Mr. Rogers' Neighborhood, were actually knitted by his real mother.

Monkee Mike Nesmith's mother, Bette Nesmith Graham was the inventor of Liquid Paper correction fluid. She sold the rights to the Gillette Corporation in 1979 for $47.5 million and when she died in 1980, she left half of her fortune to her son Michael.

Eric Clapton was born to an unwed mother and to shield him from the shame, Eric grew up believing that his grandparents were his parents and his mother was his sister.