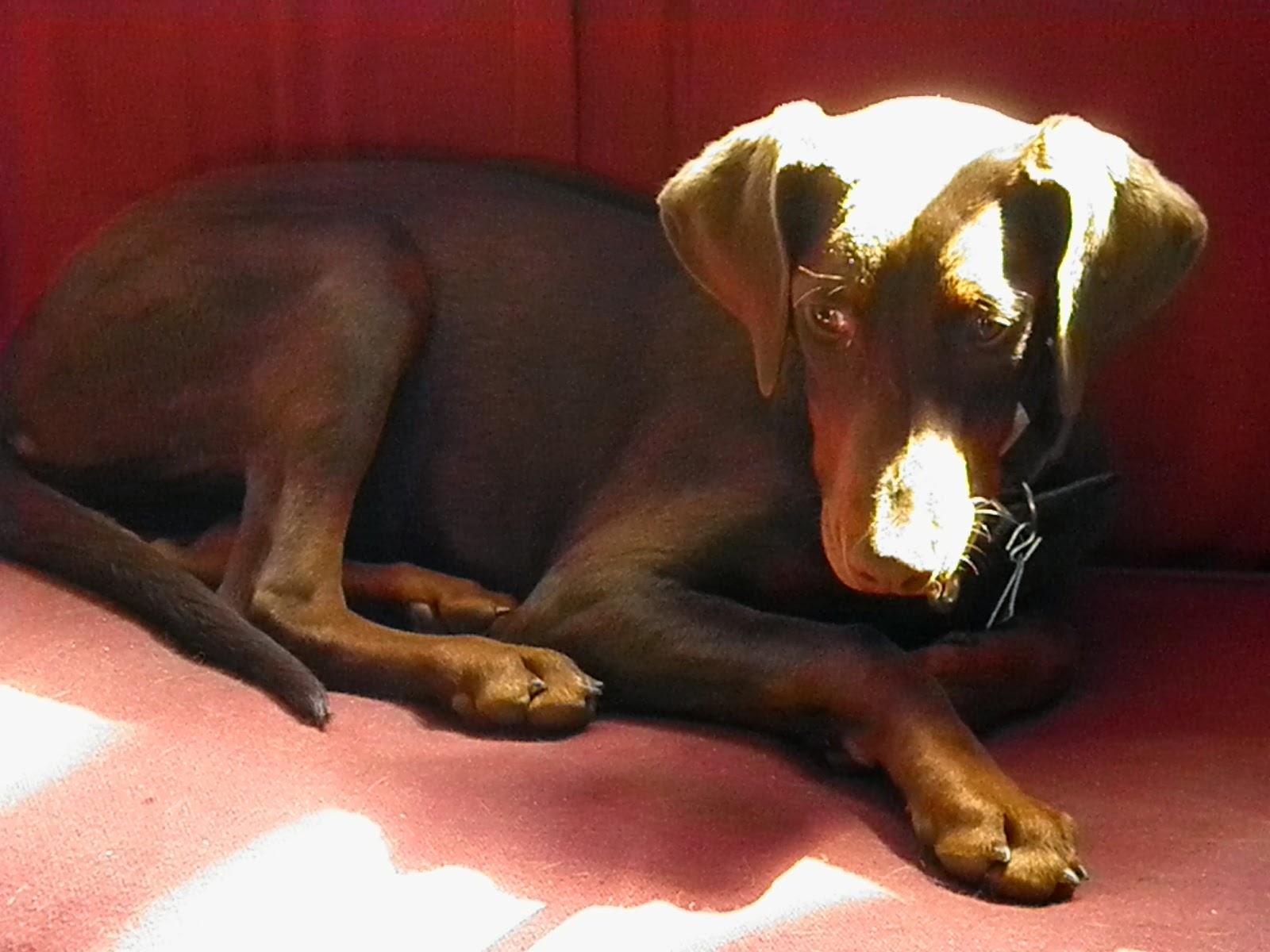 so, now I am back up to four dogs.  Her new name is Stella Elaine, she is 6 months old, weighs 35lbs and I have her listed as a hound but any dog lover knows what kind of pooch she really is.  However, my new and improved home owners insurance has four breeds listed as aggressive and I am not 'allowed' to have them.  To which I told my agent....."There is absolutely NO ONE that walks the face of GOD'S green earth that will tell me what kind of dog I will have!"  To which she replied, "Then don't tell me."  This was before I even thought about getting another dog.

She came from Maryland, lived with a Mexican family, the wife was talking to the son of a friend of mine about finding her a good home.  She told him the people living with her are abusing and tormenting her.  The next day, she stopped him and said, ''If you want that dog, take her now cause my husband is not home yet."  He snatched her, kept her over night then gave her to his mother.  Now, stay with me, this is where it gets hairy.  His mom just had nine of her dogs removed by the ASPCA.  She had just gotten the little ones from her low-life, druggy brother and was finding homes for the whole crew.  Her 18 year old blind poodle hid under the bed while the dog warden looked in her windows, and she had three others with her.  The next day, the SOB's came and took the dogs they saw.  This all happened because her son's pit bull went after someone that was parked at her driveway to let his teenage daughter out to visit her dope head boyfriend across the road.  Then the boyfriend's mother called the authorities about these aggressive dogs across the street.  Oh, it ain't pretty down there in the village.  I drive down that road sometimes to go to dad's and don't even look at them.  Thanks to my friend, they all know I carry.  They leave me alone.  So the pit had to be quarantined for 10 days, they had to buy a muzzle, she has to pay $500 a year to keep him and have a $50,000 addendum added to her insurance policy, which she doesn't have 'cause her mobile home is not worth $5000 so no one will cover it.  Add to that, a $400 fine for no license and shots on the dogs she rescued.

Then, this past weekend, my friend tells me she talked to her son and he told her I was right on.....she was a 'bait dog' for the dog fights this Mexican was having.

Oh, and this dog warden is the same goof that sits in parking lots and harasses people about licenses and shots when he sees a dog in their car.  Now, I realize that buying licenses and getting the dogs vaccinated is necessary, but, approaching someone at the vet's office and ragging on them?  My vet threw him off the property.  Do you think he bothers the Amish, their dogs don't even wear collars and are never tied up.  I can't wait 'til he comes up to me.  Oh, please, please, please!
So, that's been my last couple of weeks.

Hope all is well with everyone.

PS: Just talked to my friend this afternoon.  She had to take the pit bull to the ASPCA so they could put him down.  She didn't have the $500 and couldn't get the insurance.  There was a lady state cop there and she asked my friend what had happened.  When she heard the whole story, she was pissed.  Of course that didn't help poor Bain.  She buried him down with the other dogs and put a cross up.  Sometimes life just stinks.
Posted by SHARON at 4/06/2015 10:23:00 AM 3 comments: